Judy has been a force in the contemporary Aboriginal art movement for more than two decades. She is a woman of incredible energy who was born at a time when her people were still living a traditional nomadic life. As a result she has an innate and profound knowledge of country.

Her dynamic use of colour and unique dragged dotting style has become a part of her popular and distinctive style. Judy Watson was has been included as one of Australia‘s 50 most collectable artists by the prestigious Australian Art Collector magazine. Her work continues to be exhibited worldwide and collected by large institutions and private collectors.

Judy Watson Napangardi was born in C1925 at Yarungkanji, Mt. Doreen Station, and grew up living the traditional bush life. With her family Judy made many trips on foot back to Mina Mina and Yingipurlangu, her ancestral country on the border of the Tanami and Gibson Deserts. She now lives at Yuendemu and paints for the Warlukurlangku Aboriginal Artists.

Judy was taught to paint by her elder sister, well-know aboriginal women artist, Maggie Napangardi Watson (deceased). Although Maggie did have a huge influence on Judy’s style of painting there was always a friendly rivalry between the two sisters. Judy is a women of amazing energy and is a confident painter in her own right painting her sacred land with flamboyant brush-strokes and in vibrant colours. As a Warlpiri artist she is at the forefront of abstract rendering of the Jukurrpa whilst maintaining the strong “kurruwarri” (sacredness of place and song).

Judy painted alongside Maggie at Warlukurlangu Artists for many years, until Maggie’s death.

Judy has had ten children, two of whom are deceased.

Museum and Art Gallery of the Northern Territory, Darwin

1993 Adelaide Town Hall, (in assoc. with The Pacific Arts Symposium) 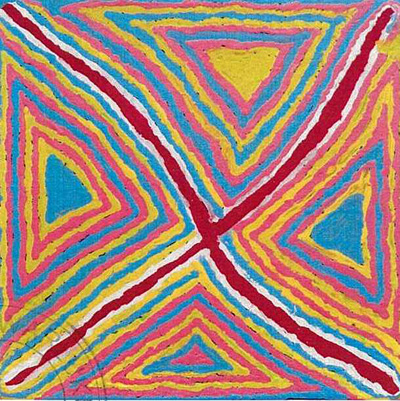 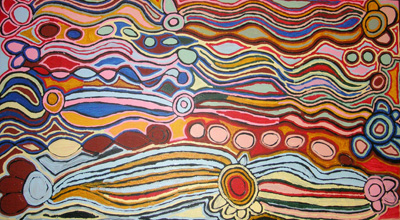