Johnny Warankula is an iconic and important member of the original acrylic art movement at Papunya, where he began painting in the late 1970‘s after a long turn as a labourer in Haasts Bluff, Mt Leibig, Yuendumu and Mt Wedge. He rapidly developed the style now known as ‘overdotting‘ to disguise the sacred nature of his Dreamings.

His work is imbued with an incredible sense of movement and ceremony that can only be understood through experiencing his paintings in the flesh. Geoffery Bardon the initiator of the acrylic movement fondly recollected that Johnny would paint with intense level of intuitive concentration. The body of work that Johnny has left behind contains some of the finest examples of not just Aboriginal, but Australian abstract painting. His work features in many public and private collections throughout the world.

Johnny Warankula Tjupurrula was born south of Lake Mackay and lived a traditional life in the bush, he learnt the sacred ceremonial Dreamtime stores from his father and grandfather.

Johnny’s first contact with Europeans was a scarry one for him as he hid in fright while an aeroplane flew over, his people believed the aeroplane to be “marnu” or the devil. He also hid when he first saw camels again believing them to be from the devil.

He and his family went to live at Hermansberg mission, as did many aboriginal families of the time. At Hermannsburg, Johnny worked as a labourer, digging the foundations for a new airport. As settlements were established, Johnny continued his labouring jobs at Haasts Bluff, Mt. Leibig, Mt Wedge and then to Papunya in 1960, where a new Aboriginal settlement had been built.

When the Queen visited in 1954, Nosepeg Tjupurulla and Johnny Warrangkula were chosen as the Aboriginal representatives to meet the monarch. Whilst Johnny was serving on the Papunya Council with Mick Namarari, Kingsley Tjungarrayi and Limpi Tjapangati he met the local teacher, Geoffrey Bardon, who supplied the elder men with paints and canvases and whose influence and support of the artists helped create the beginnings of the Aboriginal Art Movement as we know it today

Johnny was a major artist in the Aboriginal art movement. In 1984, the Sydney Morning Herald published a photograph of the Director of the Australian National Gallery, James Mollison, next to a work by Johnny Warrangkula. James Mollison declared the work of Papunya Artists to be ‘the finest abstract art ever produced in this country’.

Between the late 1980’s into the mid 1990’s, Johnny produced few works due to a badly broken arm and poor eyesight resulting from trachoma. Johnny’s enthusiasm for painting returned after receiving treatment, and his desire to record his stories for future generations and produce an income for his extended family.

Until his death in 2001, Johnny Warrangkula lived at Papunya with his wife, Gladys Napanangka and his eight daughters and two sons.

1988 Foundation: The First Decade of Collecting, National Gallery of Victoria

1988 The Inspired Dream, Life as art in Aboriginal Australia, Museum & Art Gallery of the Northern Territory and touring internationally.

1991 Alice to Penzance, The Mall Galleries, The Mall, London

Museums and Art Galleries of the Northern Territory, Darwin

The Art Gallery of NSW, Sydney 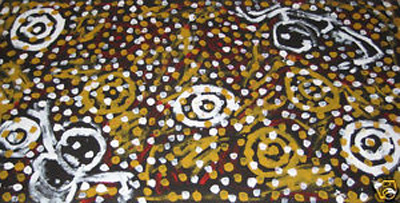 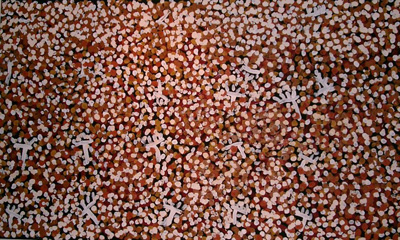