Dinny spent many years working as a stockman across the Northern Territory before arriving at Papunya in the mid 1970‘s. As a senior Walpiri man, he was recognised as a custodian of Rain Making and Water Dreaming ceremonies. He polices sacred ceremonies and paints the bodies of those taking part in ceremonies.

Being the cousin of Clifford Possum and Billy Stockman, and elder brother of Kaapa it was logical for him begin painting with the artists at the centre of the acrylic movement at Papunya. His work is painted with great precision, beautiful colours and intricate designs that reflect the importance of his role as a senior Walpiri man.

The Dreamings that feature in his work are Water, Willy Willy, Pelican, Emu, Bush Turkey, Goanna and Bush Fire.

He is a survivor of the Coniston Massacre. (This was the last officially condoned massacre of Aboriginal people. (About 70 Warlpiri men and women were murdered on Coniston Station in August 1928).

Dinny was married to Alice Napangardi (deceased), they have two daughters, a son and several grandchildren.

1981 Construction of a sand painting with Paddy Carroll Tjungurrayi, Sydney 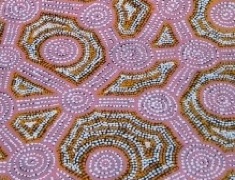