Aboriginal people have been living in this country from more than 50,000 years. Originally art was painted on the body for ceremony, in the caves showing creator spirits, hunting scenes and animals and in the sand as a map to teach the young initiates where waterholes, food and animals could be found.

Today contemporary Aboriginal art is painted on paper and canvas using traditional ochres and acrylics with brushes instead of sticks and fingers.

In the early 1970’s Aboriginal art exploded onto the world art scene. Collectors, galleries and museums worldwide are now aware of the Aboriginal Art Movement and the art critic Robert Hughes described this as the “last great art movement of the 20th Century”. The Aboriginal art industry now supports many indigenous families in remote areas as well as urban Aboriginal artists.

Tjukurpa is the Anangu dialect word that refers to the creation period when ancestral beings created the world as we know it, and from this came the religion, law and moral systems. ‘Dreamtime’ or ‘Dreaming’ are the anglicised equivalent of Tjukurpa.

According to Aboriginal belief, all life as it is today – Human, Animal, Bird and Fish is part of one vast unchanging network of relationships which can be traced to the great spirit ancestors of the Dreamtime.

The Dreamtime continues as the “Dreaming” in the spiritual lives of Aboriginal people today. The events of the ancient era of creation are enacted in ceremonies and danced in mime form.

Aboriginal people have traditional ‘Dreamings’ that are passed down from generation to generation, and allow them to represent their particular Dreamtime stories in the artworks that they create. 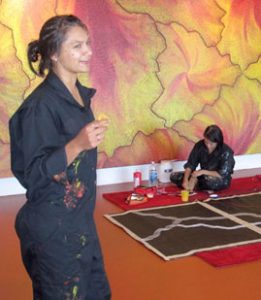 Sarrita and Tarisse King, two contemporary Aboriginal artists who learnt about country and family traditions from their father and now apply those same skills to their paintings, but with a contemporary edge.

Aboriginal rock paintings appear on cave walls all over Australia. The best-known are in the Kimberley area of West Australia. This is probably the oldest art form. The Wandjina, the ultimate creator, hunting scenes and the Bradshaw figures or Mimi Spirits are found on many cave walls going back over 40,000 years. This art form provides an insight to the activities, the spiritual beliefs and the social activity of the people of the time.

The most powerful image of the Kimberley is the Wandjina Rock Art, Found in the caves of North-West Western Australia

The Worrorra, Ngarinyin and Woonambal people trace their ancestry directly back to the Wandjina spirit ancestors.

Each image of the Wandjina, painted on the rock caves, is said to have formed at the end of their creation activity on earth after they had created the land forms, the plants, animals and humans. At the end of their work they lay down in the cave and turned into a painting.

This Wandjina is deeply spiritual to the people of The Kimberley area and many of the caves are now protected, whilst others have been and still are hidden to protect them.

All Wandjina, when painted, have similar features…they are always painted in full frontal, they have large “owl-like” eyes, long nose and no mouth. Although stories vary from clan to clan, it is said that if the Wandjina had a mouth and he opened it the rains and floods would come. Other’s say having no mouth stops gossip and telling sacred stories.

Symbols were drawn in the sand as maps showing the young initiates where to find waterholes, food and teach about hunting and how to recognize animal tracks.

Some very elaborate sand paintings were used for ceremony, they took days and days to create and once the ceremony was over were destroyed.

Painted on the bark harvested from trees. The bark is first soaked in water and then smoked to create a flat shape for painting. Bark was also used to make everything from baskets to canoes. Most bark works come from Arnhemland and northern West Australia.

Geoffrey Bardon was a school teacher who taught at the Papunya primary school, 250km west of Alice Springs during 1971-73. He was influential in creating the Western Desert Painting Movement by making acrylic paint and other materials available to the children.

Geoffrey then supported a group of elders who approached him with a desire to paint their stories, and they famously created the Honey Ant Mural on the wall of the Papunya School.

He supported and encouraged these and other men to paint their stories on boards and canvas, and the rest is history.

In these early times, dots were often used to conceal sacred cultural symbols and stories beneath. Dot paintings today depict plants, animals, waterholes and land forms to create aesthetically beautiful works that are unique to the Aboriginal art of Australia.

Many paintings of country are viewed from above, “bird’s-eye view”. Painted by the artist sitting on the ground, they have been created with an intimate knowledge of land and tell the Dreamtime creation stories of the plants, animals, earth cycles and landscape.

Weapons such as spears for fishing, hunting and fighting were created out of stone and wood. Coolamons, baskets for food gathering and small animal and bird figures were also carved out of the local wood. Necklaces and other adornments worn for ceremony were made out of feathers and seeds. Bush string to bind things together was made out of fibres from plants. These fibres were also used to weave baskets.

The traditional wind instruments from North East Arnhemland were created out of a tree branch that was hollowed out by termites, They were cut down and shaped to a long hollow instrument used in ceremony by the men.