Clifford Possum was involved in the original acrylic art movement at Papunya, and is classified as one of the forefathers of contemporary Aboriginal art, and one of its most talented and skilled painters.

Today, Clifford‘s paintings are represented in major collections and still feature in major exhibitions throughout the world. His paintings are characteristically complex and meticulously executed in unexpectedly harmonious colour combinations, and highlight the true mastery of this highly talented and important artist.

Clifford passed away in Alice Springs on the 21st June 2002, he was recognized for his contribution to Australian Art and culture, by being made an “Officer of the Order of Australia”.

Clifford Possum was born in 1932 on Napperby Station. He worked as a stockman on his traditional country, which he depicts in his Dreamtime paintings.

He was originally a wood carver and achieved fame for his carvings of snakes and goannas. One of Albert Namatjira’s sons started him painting by giving him acrylic paints. He was one of the first artists to be involved with the Aboriginal Art Movement at Papunya Tula.

In the late 70’s he expanded the scope of Papunya Tula painting by placing the trails of several ancestors on the same canvas in the fashion of a road map. Within this framework, he depicted the land geographically. This laid the foundation for traditional Aboriginal iconography to be placed on canvas. The other artists working with him took his lead and removed any elements of European Art from their work. In doing so Clifford, as well as the other artists involved with the Papunya Tula art movement helped to develop the true definition of Aboriginal Art, an art revolving around a culture, The Jukurrpa (The Dreamtime).

When asked why he became an Artist, he answered,

“That Dreaming been all the time. From our early days, before European people came up. That Dreaming carry on. Old people carry on this law, business, schooling for the young people. Grandfather and grandmother, uncle and aunty, mummy and father, all that, they been carry on this, teach ‘em all the young boys and girls. They been using the dancing boards, spear, boomerang all painted. And they been using them on body different times.

Kids, I see them all the time, painted. All the young fellas they go hunting and the old people there, they do sand painting. They put down all the story, same like I do on canvas. All the young fella they bring ‘em back kangaroo. Same all the ladies, they been get all the bush fruit, might be bush onion, plum, might be honey ants, might be yala, all the kungkas (women) bring them back. Because everybody there all ready waiting. Everybody painted. They been using ochre’s all the colours from the rock. People use them to paint up. I use paint and canvas that’s not from us, from European people. Business time we don’t use paints the way I use them, no we use them from rock, teach ‘em all the young fellas.”

2002 Medal of the Order of Australia

The Holmes a Court Collection, Perth.

Clifford Possum Tjapaltjarri has had 457 works listed from the 1970’s onwards. 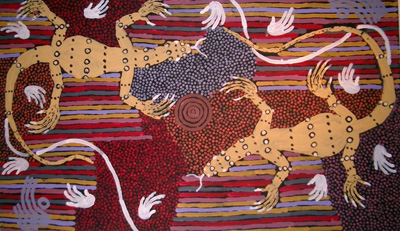 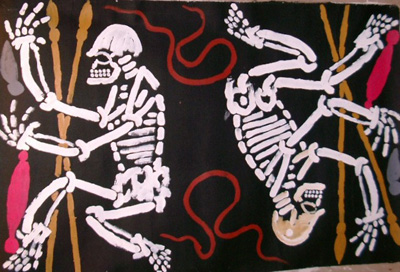 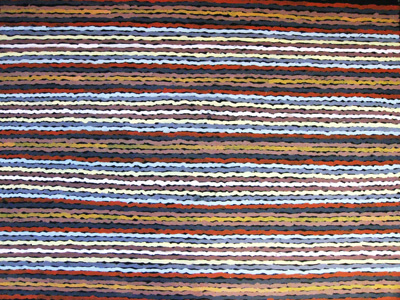