Billy Stockman‘s life began with tragedy. His mother and others of his family were killed in the 1928 Coniston Massacre, 280kms north of Alice Springs, while he was sleeping in a coolamon under a bush where his mother had concealed him. Just one of only two survivors, Billy was consequently found and taken in by the family of perhaps Australia’s most famous Aboriginal artist, Clifford Possum Tjapaltjarri, and raised as an adopted brother.

BILLY WORKED AS A STOCKMAN ON NAPPERBY STATION, WHERE HE WOULD SELL CARVINGS AND BOOMERANGS TO U.S SOLDIERS STATIONED NEARBY DURING WWII. IN TIME, HE BEGAN TO PAINT DESIGNS ON THEM.

In the late 1960‘s, Billy moved to the desert settlement of Papunya, where he was part of the most important moment in the Contemporary Indigenous Art Movement – with the encouragement of local school teacher Geoffery Bardon, Billy helped paint the Honey Ant Dreaming mural on the wall of the Papunya school with Kaapa Mbitjana Tjampitjinpa, Long Jack Phillipus and other senior members of the community.

Although this painting was tragically over-painted by orders of the local government officials, it is considered the beginning of the acrylic movement. Billy Stockman was a leader amongst his people and was actively involved as a campaigner for land rights and development of more equitable conditions for Indigenous people.

Billy Stockman was a wood carver before he became a painter like Kaapa Tjampitjinpa and Clifford Possum, He was one of the first artists to start painting large scale canvasses.

BILLY STOCKMAN SERVED AS CHAIRMAN OF PAPUNYA TULA ARTISTS FROM 1976–1977 AND AS A MEMBER OF THE ABORIGINAL ARTS BOARD OF THE AUSTRALIA COUNCIL FROM 1975–1979.

He represented Papunya Tula Artists on several international cultural exchange projects and also traveled to New York in 1988 for the opening of Dreamings: The Art of Aboriginal Australia. He has now retired from painting and lives at Hetti Perkins Home for the Aged in Alice Springs.

1985 Dot and Circle, a retrospective survey of the Aboriginal acrylic; paintings of Central Australia, Royal Melbourne Institute of Technology Melbourne;

1985 The Face of the Centre: Papunya Tula Paintings;

1988 The Inspired Dream, Life as art in Aboriginal Australia, Museum and Art Gallery of the Northern Territory and touring internationally;

1991 Alice to Penzance, The Mall Galleries, The Mall, London; 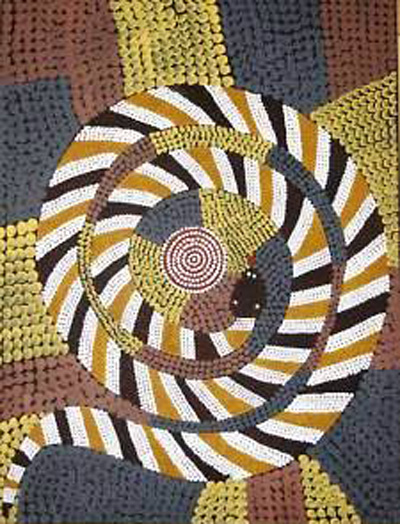